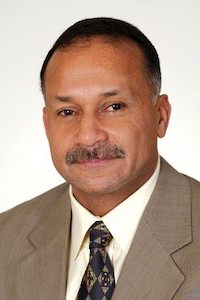 Ralph C. Martin II graduated from Brandeis University before continuing on to Northeastern University School of Law. Since 2011, he has served as the Chief Legal Officer for the university and serves on the eight-member Senior Leadership Team of Northeastern University, which directs the overall strategic direction of the university under the leadership of the president. He also oversees compliance, risk, labor relations, public safety and policing, and city and community relations. Mr. Martin also led the university’s 2013 Institutional Master Planning (IMP) effort with the city of Boston.

Before joining Northeastern, Mr. Martin was the managing partner of the 275-lawyer Boston office of Bingham McCutchen, an 1,100-lawyer international law firm. He has more than 30 years of experience as a trial lawyer and a state and federal prosecutor. He practiced in the areas of corporate investigations, white-collar defense, and general civil litigation. Mr. Martin was also the managing principal of Bingham Consulting Group, a firm subsidiary business that advised clients challenged by the legal, public policy, and other complexities of multistate investigations by attorneys general. Mr. Martin has served on several boards, including serving for two years as chairman of the Greater Boston Chamber of Commerce, the region’s leading business advocacy group. In May 2006, Ralph was elected to a two-year term as chairman of the Greater Boston Chamber of Commerce.

Mr. Martin is also the former Suffolk County district attorney, having served as the elected prosecutor for Boston, Chelsea, Revere, and Winthrop from 1992–2002. During his nearly 10 years in office, he was credited with helping to oversee substantial changes in the way law enforcement collaborated with other agencies to make dramatic improvements in crime prevention and prosecution. He is the first African American district attorney in Suffolk County’s history. He was recognized for his leadership by former President Bill Clinton and former Attorney General Janet Reno, and traveled across the country to both lecture and consult on the business and strategy of managing and reducing crime.

Mr. Martin served as an adjunct associate professor of legal studies at Brandeis University in 2000 and 2001, and as a lecturer on civil trial practice at Northeastern University School of Law from 1987-92.