What is an ACL injury?

An ACL injury is a common knee injury that happens when the anterior cruciate ligament (ACL) is sprained or torn, typically during a sporting event or practice.

The ACL is band of tissue that connects the shinbone (tibia) to the thighbone (femur) and provides stability to the knee joint. The ligament is flexible up to a point, but can be injured if it is stretched too far. This typically happens as a result of twisting, cutting, and decelerating during sports.

The most common type of ACL injury in children is a complete ACL tear. This often happens in combination with other injuries, such as a torn meniscus. Usually, surgery is recommended to repair the knee. The type of surgical procedure depends on the patient’s age and their stage of growth.

Patients who have torn an ACL are at high risk of repeat injury. The injury increases the risk of osteoarthritis in early adulthood. You can reduce your risk of an ACL injury or re-injury by developing your overall fitness, especially leg strength and balance. Proper athletic technique, such as positioning and landing with bent knees, can also reduce your risk.

Where is the ACL located in the anatomy of the knee? 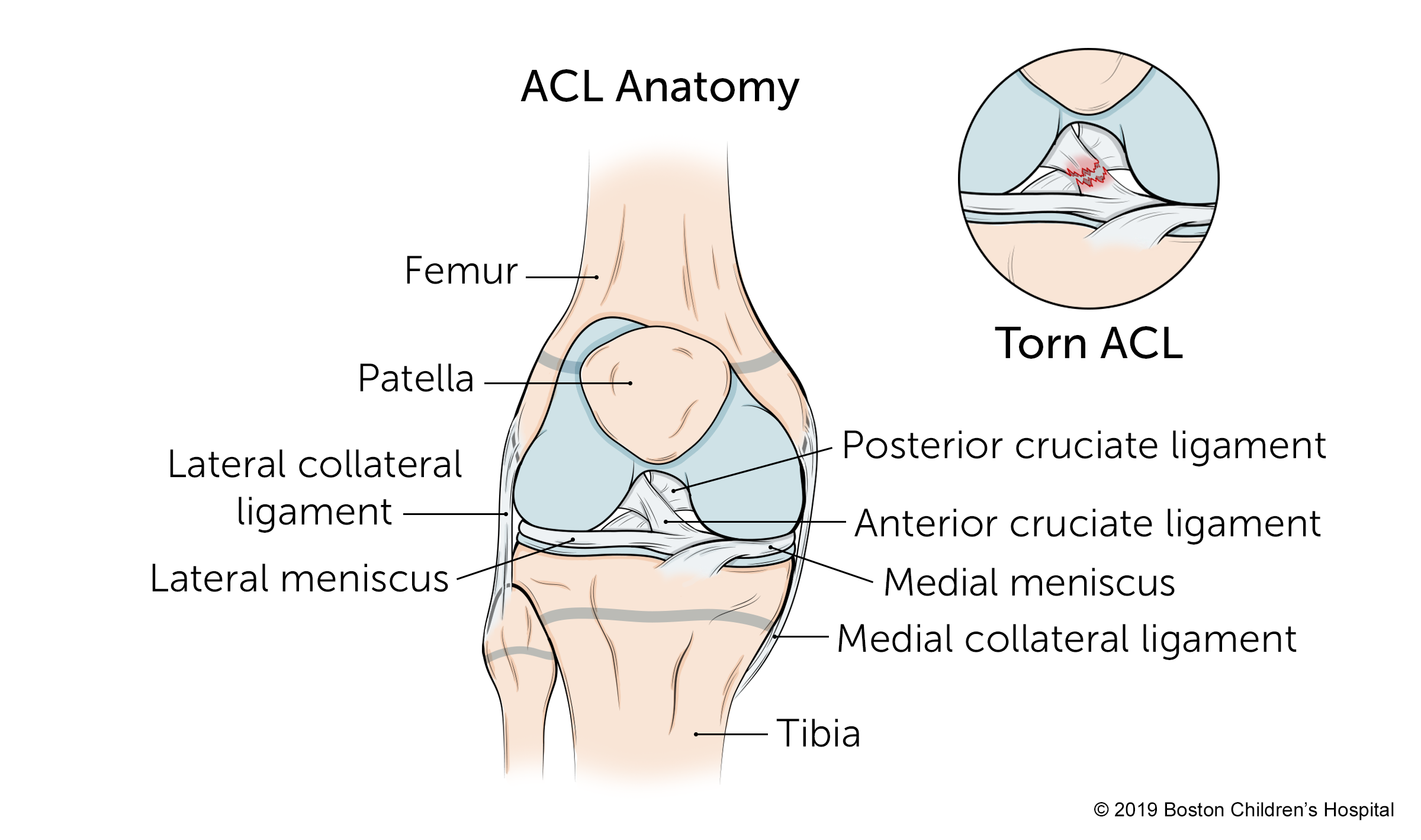 The ACL is one of four main ligaments in the knee that attach the thigh bone (femur) to the shin bone (tibia). The kneecap (patella) located in the front of the knee, protects the ACL and other knee ligaments.

The ACL and another ligament called the posterior cruciate ligament (PCL) run through the center of the knee. These ligaments prevent the shin bone from sliding too far forward or backward under the thigh bone.

The meniscus provides padding and shock absorption for the knee. There are two menisci in each knee. Without these wedge-shaped pieces of cartilage, the thigh bone and shin bone would rub painfully against each other.

What are the symptoms of an ACL injury?

If you have injured your ACL, you probably heard a popping noise at the moment the ligament was sprained or torn.

Other symptoms of an ACL injury include: 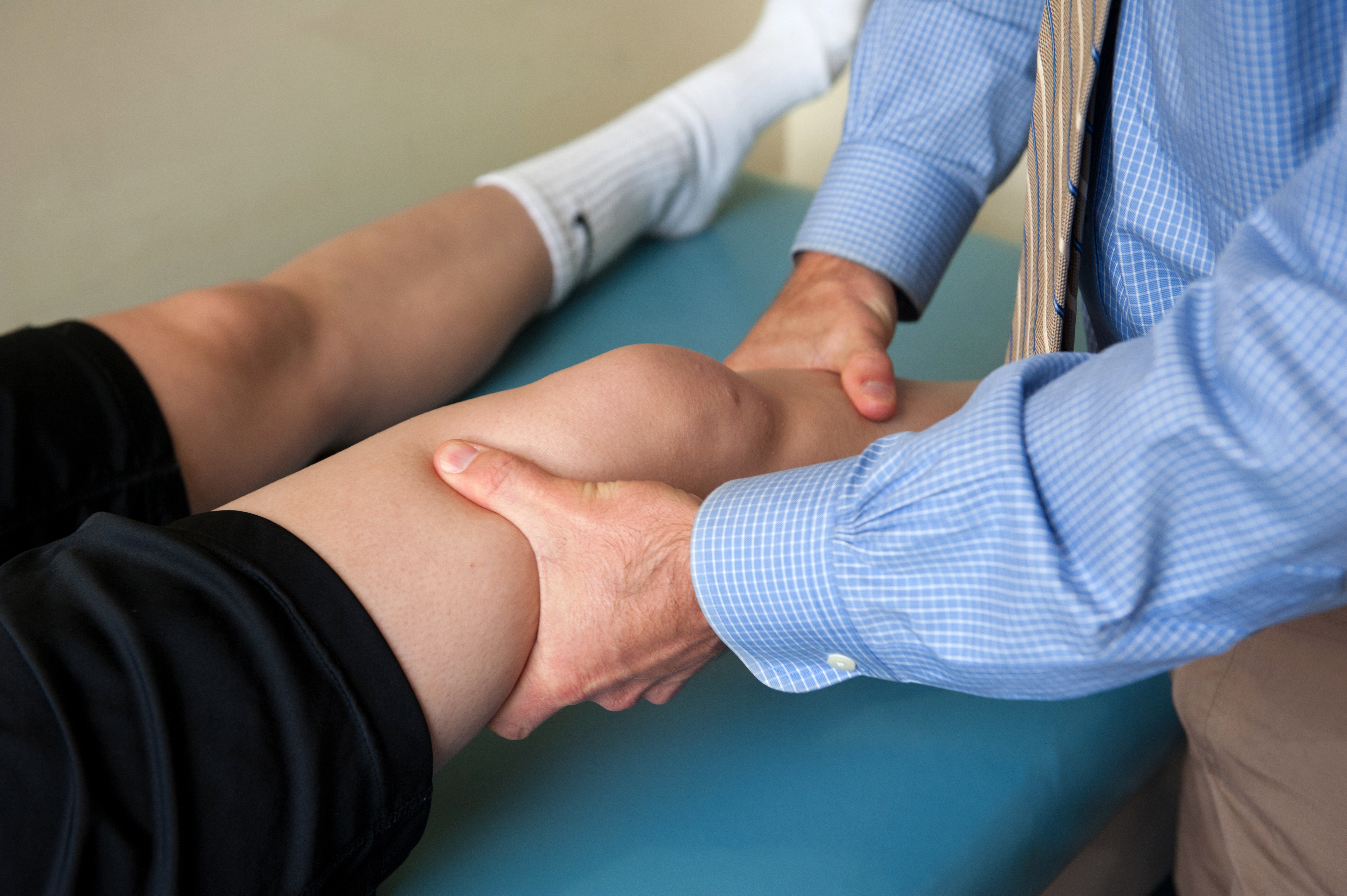 Who is at risk of a torn ACL?

Teenage athletes have the highest rate of ACL injuries, largely because they are the most physically active age group. Girls are five to eight times more likely to tear an ACL than boys. There are several possible reasons that ACL injuries affect more girls than boys:

With focused training, any athlete can increase the stability of their knees and reduce their risk of ACL injury.

How serious are ACL injuries?

An ACL tear is a serious injury that can end an athlete’s season. Fortunately, treatment of ACL injuries has improved, along with the rate of recovery.

Most patients start to use an exercise bike right after surgery, begin physical therapy two weeks after surgery, and begin jogging three months after surgery. More than 90 percent of injured athletes are cleared to return to sports after nine months, often with a custom knee brace. The brace is usually worn for one to two years after surgery.

How we care for ACL injuries

The ACL Program at Boston Children’s Hospital combines expertise in ACL repair and recovery to help injured athletes recover. Our team of orthopedic surgeons and sports medicine specialists are experts in caring for athletes of all ages with ACL injuries and ACL tears, from aspiring novices to Olympic competitors. We work as a team with patients and families to help athletes come back as strong, or stronger, than they were before their injury.

How is an ACL injury diagnosed?

Your doctor will examine your knee and may uses specific tests to stress the knee to identify the injured ligaments.

As part of the diagnosis, your doctor may order an x-ray to check for any fractures in the bones of the knee. But x-rays only produce images of the bone. They can’t detect soft tissues such as ligaments and tendons, so an MRI may be necessary to confirm the diagnosis. This diagnostic imaging exam can help your doctor see how seriously your ACL has been injured, as well as damage to other ligaments and tendons in the knee. 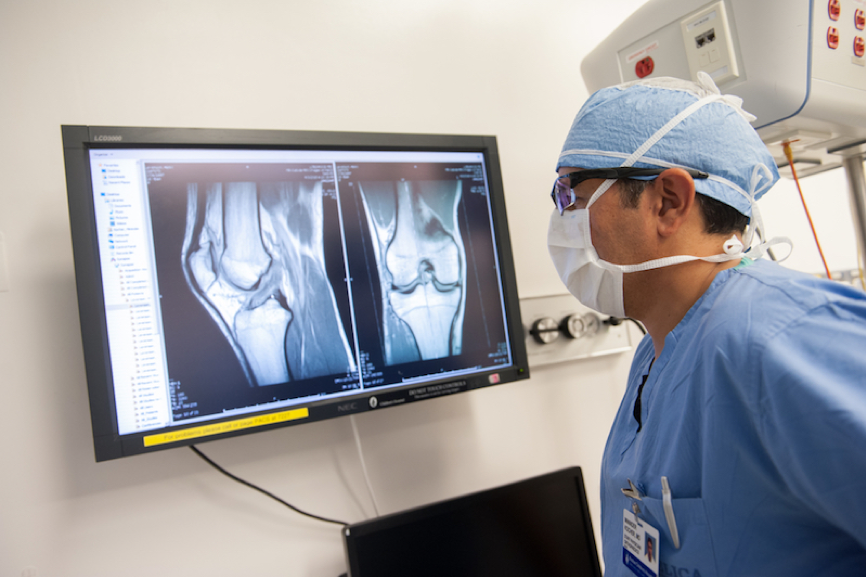 Mininder Kocher, MD, Chief of the Sports Medicine Division, examines an image of a patient's knee.

What are the treatment options for an ACL injury?

Treatment options depend on your age and the severity of your injury. Some less severe injuries can be treated with rest, bracing, and physical therapy. It will be important for you to follow your physician’s instructions and avoid sports that involve running, jumping, and pivoting while you recover.

If your doctor determines that surgery is your best option, the procedure will probably be scheduled three to six weeks after you were injured. This allows the swelling around the knee to go down and for you to regain some knee strength and flexibility.

In the weeks before surgery, your doctor may prescribe pre-habilitation (pre-hab) with a physical therapist. Pre-hab exercises such as leg raises, stationary biking, and elliptical jogging can help strengthen the muscles around your knee. Research suggests that pre-hab can lead to better outcomes and greater range of motion after surgery. You will also be measured for an ACL brace. Your doctor will tell you how and when to wear the brace.

Your doctor will recommend a surgical procedure based on the severity of your injury, your age, and the stage of development of your bones.

Patients who have finished growing, typically 15 to 16 years or older for females and 16 to 17 or older for males, are candidates for ACL reconstruction. ACL reconstruction is actually two surgeries. First, the orthopedic surgeon takes a graft from the patient’s hamstring or patella tendon. Second, the surgeon removes the end of the torn ACL and drills tunnels through the growth plate to attach the graft with screws or other means. The graft will now serve as reconstructed ACL. This second surgery can be done through tiny incisions in the skin around the knee. The tunnels in the bone fill in as the knee heals. The risk of re-tearing the ACL is 5 to 10 percent. 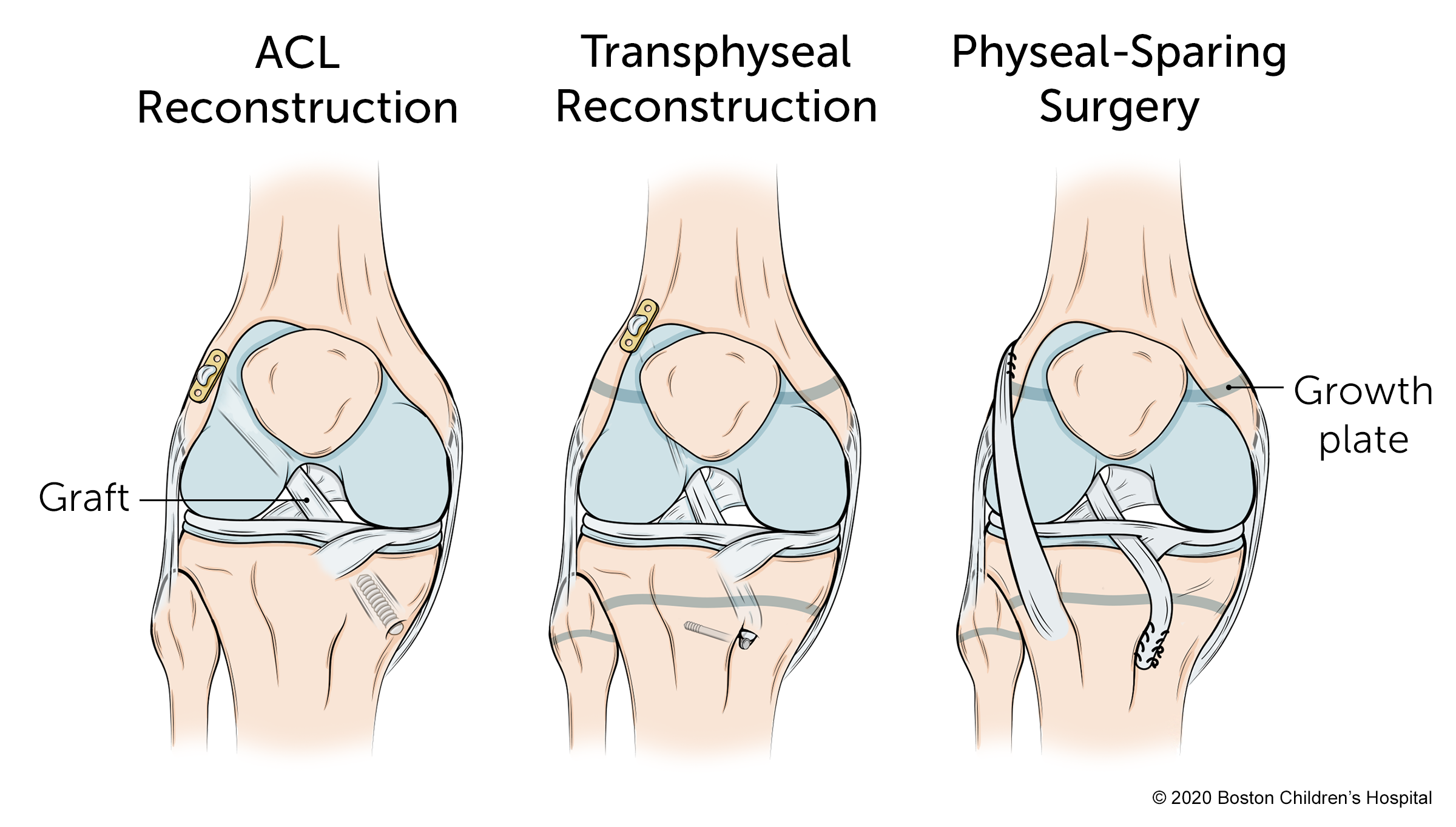 Transphyseal reconstruction is the preferred approach for teenagers between the ages of about 13 to 16 or 17. This procedure is similar to a traditional adult ACL surgery. The surgeon takes a graft from another part of the patient’s leg but attaches it without drilling through the growth plate. The risk of re-tearing the graft ranges from 5 to 10 percent.

Physeal-sparing surgery is the preferred approach for pre-pubescent patients up to about age 13. Unlike standard ACL reconstruction, this surgery eliminates the need to drill tunnels across the growth plate and avoids disturbing the growth of younger patients. The surgeon takes a graft from the iliotibial band (IT band) and attaches it with sutures to the area above the knee. The risk of re-tearing the graft is about 4 to 6 percent.

What happens after ACL surgery?

After having ACL surgery, you will miss about one week of school and will need to use crutches while your knee recovers. Your recovery will take place in stages:

First two weeks after surgery: Your doctor may prescribe a continuous passive motion (CPM) device. You will need to use it for several hours a day. You may want to watch a movie or ask friends or teammates over to help you pass the time. The CPM will gently flex and extend your knee to help restore your range of motion.

Two weeks to several months after surgery: Physical therapy typically begins after your 2-week follow-up appointment. A physical therapist will lead you through exercises that will help keep your knee flexible and rebuild strength. Even though it can be hard work, it’s important to stay focused and committed to physical therapy. Doing so will pay off later when you return to sports.

Six months to two years after surgery: You will continue have follow-up appointments with your orthopedic surgeon at regular intervals to assess your knee. The vast majority of patients (93 percent) are cleared to return to sports nine months after their surgery. Your provider will likely recommend that you continue to wear your knee brace whenever you participate in sports for one to two years after surgery.

We are at the forefront of using ultrasound technology to evaluate and treat athletes with injuries of many different types.