What is a congenital diaphragmatic hernia?

The diaphragm is a thin layer of muscle and tissue that separates the chest and abdominal cavity. It is the major muscle that the body uses to breathe. When your child has a congenital diaphragmatic hernia (CDH), it means that there’s a hole in that layer — or, rarely, that the diaphragm is missing altogether. CDH affects about one in every 2,500 babies.

In CDH, the contents of your child's abdomen, which may include the stomach, intestines, liver, and/or spleen, may go through the hole and into the chest. This prevents the normal development of the lung on that side, and also affects the growth of the other lung. When your child’s lungs don’t fully develop, they will have trouble breathing after birth.

When the organs from the abdomen prevent the lungs from growing, the poor lung growth is called pulmonary hypoplasia. Healthy lungs have millions of small air sacs (alveoli), each of which resembles a balloon filled with air. With pulmonary hypoplasia:

When this happens, your baby is unable to take in enough oxygen to stay healthy.

What are the different types of CDH?

There are two kinds of CDH:

CDH is a serious, life-threatening condition. However, the outlook for babies born with a CDH has greatly improved with advances in treatment.

While we don’t know exactly what causes CDH, scientists believe that multiple genes from both parents — as well as a number of environmental factors that we do not yet fully understand — may contribute.

What are the symptoms of CDH?

Every child may experience symptoms differently, but possible symptoms of a Bochdalek diaphragmatic hernia may include:

A baby born with a Morgagni hernia may or may not show any symptoms. Babies with a Bochdalek type of CDH are more likely to have another birth defect. Complications of a CDH may include:

How we care for CDH at Boston Children’s Hospital

Boston Children’s treats more than 20 newborns with CDH each year with a success rate among the best in the world. Our survival rate for the highest risk groups of babies with CDH is consistently 10 percent higher than that of other centers dedicated to treating this condition.

When a CDH is diagnosed or suspected during pregnancy, our clinicians will coordinate treatment through the Maternal Fetal Care Center, Children also come into the care of the program when a CDH is diagnosed after birth, and on an outpatient basis for long-term treatment. The Congenital Diaphragmatic Hernia Clinic was established in 1991 and is the first of its type in the world. We follow over 400 children with CDH with a team of surgeons, pulmonologists, developmental specialists, nutritionists, and cardiologists to assure the best long-term outcome possible. 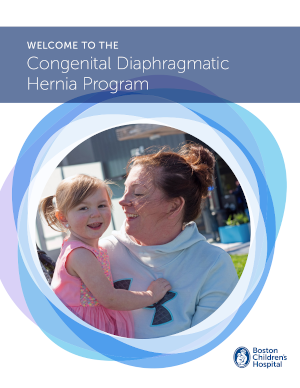 How is a congenital diaphragmatic hernia diagnosed?

During routine prenatal care an ultrasound may reveal the existence or suspicion of a diaphragmatic hernia. If a CDH is diagnosed or suspected during pregnancy, our clinicians will coordinate care through the Maternal Fetal Care Center. The following tests are performed as part of the evaluation to confirm the presence of a CDH and to find out how severe it is:

After all the necessary tests are completed, our experts meet to review and discuss what they have learned. Then they will meet with you and your family to discuss the results and outline the best treatment options.

If a CDH hasn’t been diagnosed before birth, it is usually diagnosed in the newborn period when the baby has trouble breathing. Rarely, with small hernias, and often with Morgagni-type CDH, it is diagnosed later in infancy or in childhood.

The following tests are often done after birth:

How is a CDH treated?

Every child with a CDH is unique, so treatment can vary based on the level of severity of the CDH, related anomalies, and other factors.

At Boston Children's, our team in the Maternal Fetal Care Center assists in the careful management of the mother’s pregnancy and delivery, as well as the stabilization of the baby at birth and postnatal treatment. This comprehensive, multidisciplinary care has resulted in high success rates.

Our surgical team is present at the delivery to assist the obstetrician and immediately begin care of your child. Your baby will require a breathing tube and be placed on a breathing machine called a mechanical ventilator before transport to Boston Children’s.

Extracorporeal membrane oxygenation (ECMO) is a heart and lung bypass system that does the job that the heart and lungs would be doing if they developed fully. ECMO may be needed to support your baby’s heart and lungs if they are unable to do so until your baby's condition stabilizes and improves. Having your baby at a hospital like Boston Children's that is equipped with ECMO is vitally important to aid in the management of CDH.

After your baby is born, they will be taken to and cared for in our Medical and Surgical Intensive Care Unit (MSICU) at Boston Children’s.

Babies will need to remain in the MSICU for a while after surgery.

Before leaving the hospital

Before your baby is discharged, we conduct many tests to make sure that all of their systems are working well.

These tests can include the following:

What does the follow-up treatment plan involve?