What is slipped capital femoral epiphysis?

A SCFE is actually a fracture of the growth plate. The fracture is usually a fairly stable one, and the slippage occurs very slowly. Occasionally, the gradual slippage can become very unstable and the ball can completely slip, leading to severe deformity and even blood supply problems to the “ball.” For this reason, every hip with SCFE should be treated immediately to prevent unstable SCFE. 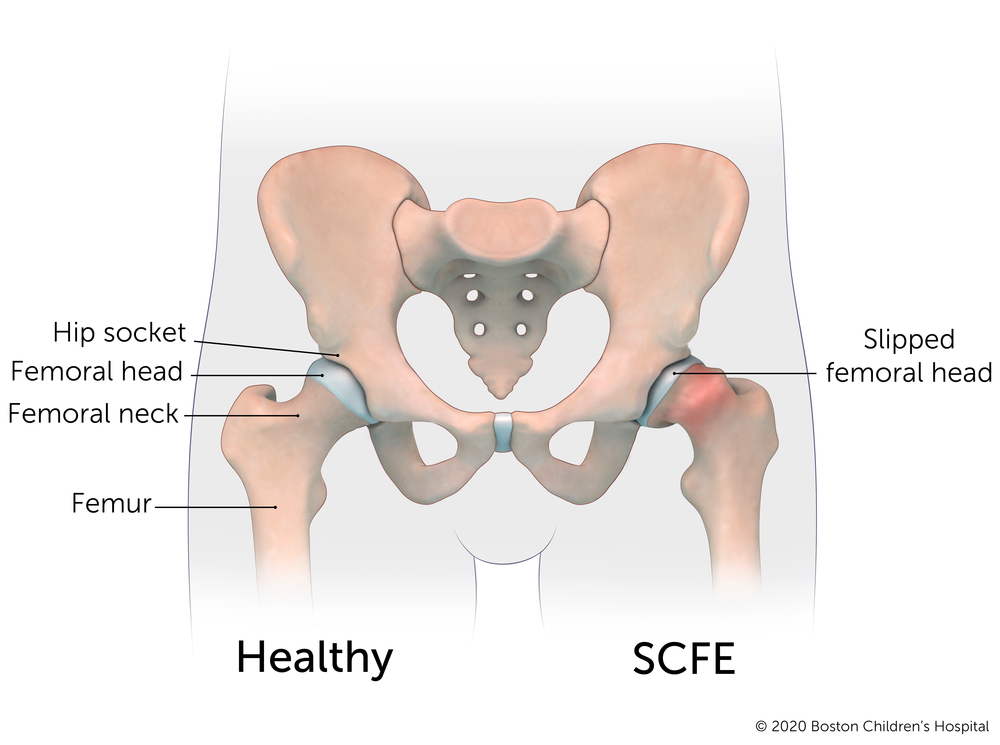 What are the symptoms of slipped capital femoral epiphysis?

Some signs and symptoms can include:

In pre-adolescent and adolescent growth and development, a child is growing quickly as adult hormones begin to circulate in his or her system. The growth plate (the area at the end of bone responsible for growth, which is not as strong as bone) gets weaker because it’s broadening. These phenomena, combined with certain anatomical factors, such as the shapes of the femur and the socket, can lead to slippage.

Slipped capital femoral epiphysis (SCFE) is a rare condition that is slightly more likely to occur in boys than girls. SCFE occurs in about one per 1,000 to one per 10,000 children and teens; children ages 12 to 14 years are most at risk. SCFE is more prevalent in the northeast region of the U.S. than in the southwest and is more prevalent among African-Americans.

Risk factors that increase the likelihood of SCFE include:

SCFE is usually an emergency and must be diagnosed and treated early. In 20 to 40 percent of affected children, SCFE will be present in both hips at the time the child is diagnosed. If only one hip is affected, the other hip will eventually slip 30 to 60 percent of the time. Treatment is surgical.

How we care for SCFE

The Child and Young Adult Hip Preservation Program at Boston Children's Hospital treats both common and complex hip disorders. As the first program in the country to focus on hip disorders in children and young adults, we are experts in diagnosis and treatment of SCFE and other hip problems.

Download our patient fact sheet for SCFE to learn more about this condition and how the hip specialists in Boston Children’s Child and Young Adult Hip Preservation Program provide comprehensive care throughout each patient’s treatment.

At Boston Children's Hospital, we know that the first step to treating your child’s slipped capital femoral epiphysis (SCFE) is to form a complete and accurate diagnosis.

Our goal is to diagnose SCFE early in order to prevent the head of the thigh bone from slipping further, and thus preventing hip deformity. If your child receives a diagnosis of SCFE, he or she must avoid putting weight on the hip until after treatment and may be instructed to use crutches or a wheelchair until after receiving treatment.

Your child’s doctor will conduct a physical exam, during which he or she can often feel the ball popping in and out of the socket. The doctor will also take a family history (including any hip problems in your family) and may use diagnostic tests to get detailed images of your child’s hip joint.

In addition to a complete medical history and physical examination, diagnostic procedures for SCFE may include:

The goal of treatment is to prevent the femoral head from further slippage, to avoid complications and eliminate hip impingement, which can cause arthritis later in life.

The standard of care for SCFE is limited open surgery, which uses steel screws and pins (internal fixation) to hold the femoral head onto the femur to stabilize it and prevent from slipping further. Some children need more complex surgery to realign the femur or reshape the bone.

If a child who has a mild case of SCFE remains relatively pain-free, parents may be tempted to leave their child’s diagnosed condition untreated. However, left untreated, SCFE almost always worsens with time — and the ball may completely slip off. Even if the child grows to adolescence without developing serious pain or a noticeable limp, it’s inevitable that the untreated hip will wear out and become arthritic in adulthood.

Long-term outlook for a child with slipped capital femoral epiphysis

Success rates are high for SCFE treatment at Boston Children’s. Treating your child’s hip as soon as symptoms develop greatly increases the likelihood of a successful outcome. Most children treated for SCFE at Boston Children’s have treatments that enable them walk, play, grow and live active lives.

However, a significant percentage of children with SCFE in one hip will eventually develop the condition in the other hip. Your child should continue to be followed by an orthopedist at least until skeletal growth is complete. Your doctor will also monitor your child’s repaired hip, since it needs to grow normally through the whole growth period in order to be durable for a lifetime.

Download our patient fact sheet for SCFE to learn more about this condition and how the hip specialists in Boston Children’s Child and Young Adult Hip Preservation Program provide comprehensive care throughout each patient’s treatment.