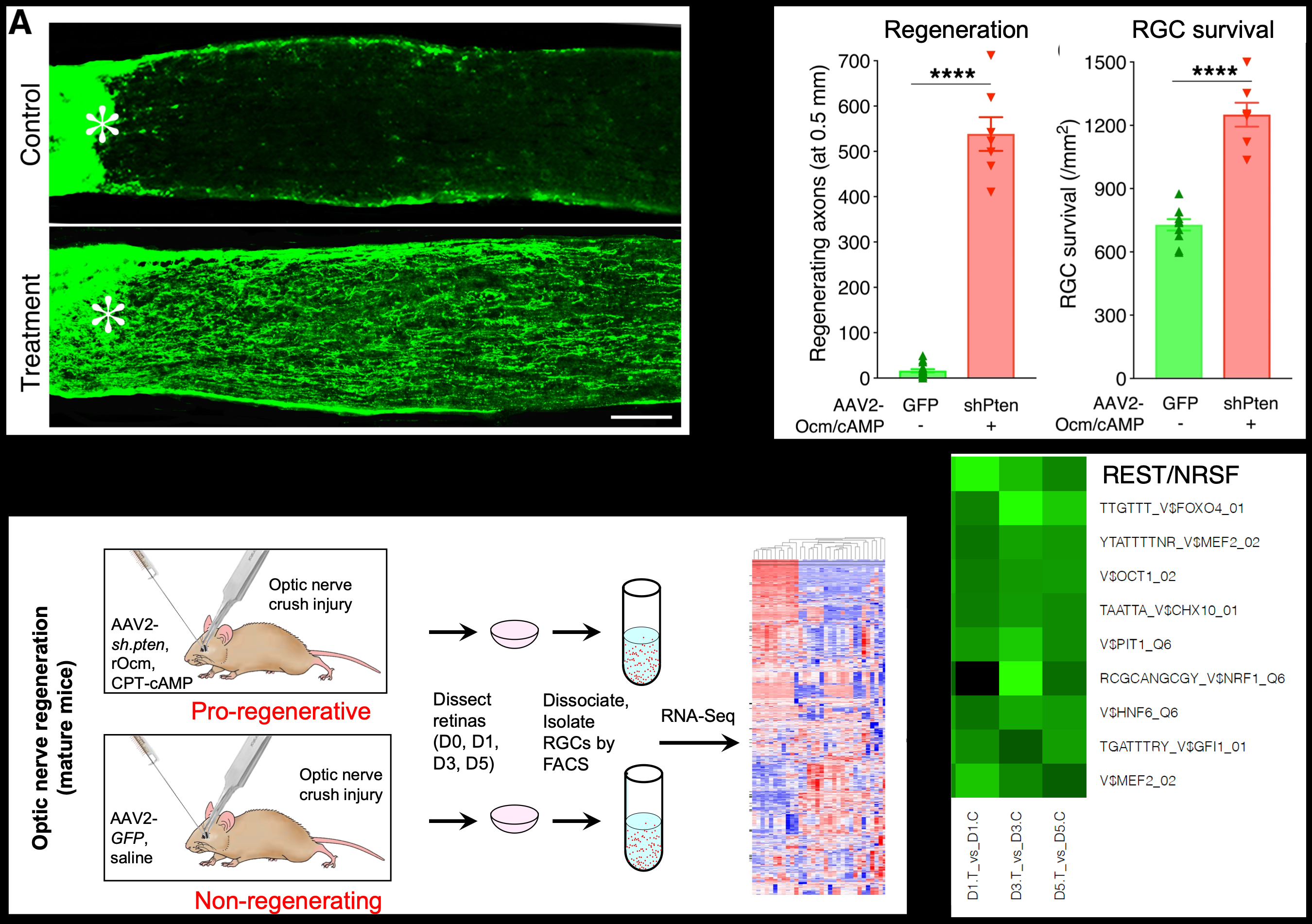 Using fluorescent-activated cell sorting (FACS) to isolate RGCs followed by microarray analysis, we investigated the changes in RGCs’ gene expression underlying axon regeneration in vivo. We found that inducing a regenerative state causes RGCs to undergo a profound change in gene expression resembling the pattern seen during regeneration in the peripheral nervous system. These results represented the first demonstration that CNS neurons are capable of switching into a robust growth state1. More than a decade later, we re-examined the changes in RGCs’ transcriptome using whole-genome sequencing, focusing on early time points to identify upstream changes that may regulate later changes in gene expression. Induction of a regenerative state was characterized by a number of differentially expressed genes as early as one day after optic nerve injury. Through bioinformatics, we identified REST (NRSF) and Elk-1 as upstream transcription factors that suppress/activate (respectively) many of the genes associated with axon regeneration. The importance of REST was validated in studies in which we either conditionally deleted the REST gene or expressed a dominant-negative REST mutant in RGCs. Both approaches resulted in substantial optic nerve regeneration and an increase in RGC survival as strong as that induced by PTEN deletion. Thus, knock-down of REST is sufficient to capture much of the effect of the strongly pro-regenerative treatment used to generate our transcriptomic data2. These studies were done in collaboration with Drs. Yuyan Cheng, Daniel Geschwind, and Riki Kawaguchi (UCLA). REST was also found to play a major role in peripheral nerve regeneration (with Clifford Woolf) and regrowth of the injured corticospinal tract (with Michael Sofroniew, UCLA), and is one of the major transcription factors predicted to decrease the ability of RGCs to extend axons during development (studies with Dr. Jeffrey Goldberg, Stanford).

Within a day after optic nerve injury, levels of two protein kinases, DLK and LZK, become elevated at the injury site and initiate a signaling cascade that is conveyed retrogradely up the axon, activating a series of other kinases and four transcription factors (TFs) that lead to RGC death but that also enable RGCs to respond to pro-regenerative treatments3-5. Working with Dr. Welsbie’s group, Dr. Kim Wong investigated whether manipulating the downstream TFs individually might promote RGC survival while at the same time allowing regeneration to occur. Dr. Wong discovered that, whereas deletion of one of the four TFs provided nearly complete protection of injured RGCs, it fully prevented regeneration. However, deleting another TF led to partial RGC survival but was sufficient to cause some regeneration on its own and to strongly enhance regeneration induced by a pro-regenerative treatment6.