T lymphocytes, or T-cells, are critical sentinels that eliminate viruses and tumors. However, their strength to find and destroy their diseased targets often declines during chronic infections and cancer - a state referred to as T-cell exhaustion. Reversal of T-cell exhaustion by blocking of the immune checkpoints by programmed cell death protein 1 (PD-1) has been demonstrated to be remarkably successful in treating a wide range of cancers. Understanding the cause and regulation of T-cell exhaustion could help to discover novel therapeutic targets and to improve current therapies for chronic infections and cancer.

The Winau lab has found a new pathway that protects T-cells from severe exhaustion during chronic viral infection. This is an important process that ensures long-lasting, anti-viral immunity. Florian Winau and colleagues found that the function of transmembrane protein 16 (TMEM16) F, also known as the lipid scramblase, is to shut down T-cell receptor signaling, thus preventing overactivation of T-cells. By using the lymphocytic choriomeningitis virus (LCMV) infection model, they demonstrated that scramblase-deficient T-cells are initially in a hyperactive state. This hyperactivity leads to a burnout of T-cells, thereby causing them to be completely non-functional. In comparison to the successful clearance of virus by the scramblase-producing, control animals, in the mice lacking expression of scramblase, the viral burden remained consistently high. Furthermore, the Winau group has found that scramblase is also essential for the survival of a specific T -cell population that is characterized by expression of the transcription factor T-bet (T-bethi)- a population that represents precursor cells responsible for replenishing the anti-viral T cell pool. Based on the observation that T-bethi expressing T-cells are the main population of cells capable of responding to PD-1 blockade, the Winau lab is now investigating whether targeted activation of scramblase can enlarge the pool of T-bethi expressing cells, and if it can improve efficacy of therapies against chronic infection and cancer when used in combination with immune checkpoint inhibitors. 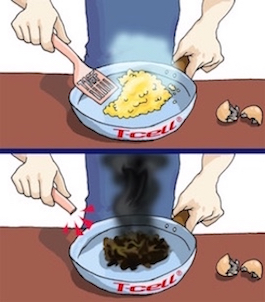 Figure 1. The drawing shows how the spatula (TMEM16F) generates nicely scrambled eggs in a pan, which represents a T cell. In the absence of TMEM16F (lower panel), the process fails and leads to burnout and T cell exhaustion. Artwork by Jessica Kim.