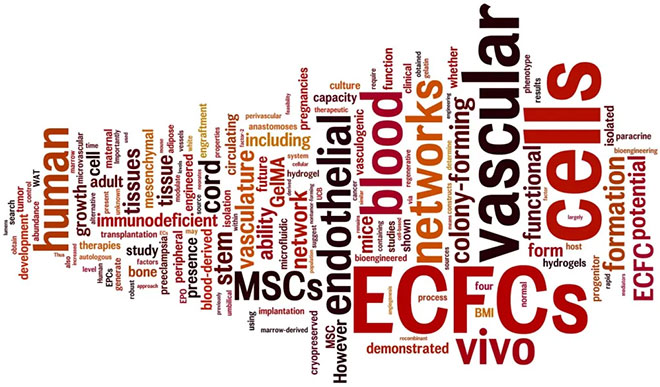 ECFCs are progenitors of endothelial cells that circulate in peripheral blood. ECFCs have enormous potential in Regenerative Medicine because they can generate large amounts of autologous ECs for vascular therapies. We specialize in the biology of human ECFCs derived from umbilical cord blood and adult peripheral blood. We are currently studying several aspects of ECFCs:

Human-induced pluripotent stem cell (h-iPSC)-derived endothelial cells (h-iECs) have become a valuable tool in regenerative medicine. Our group has developed a method for rapid, consistent, and highly efficient generation of h-iECs. Our protocol has broad applications and could reliably provide an unlimited number of h-iECs for vascular therapies.

Vascular networks are central to the functioning of most tissues. We use a two-cell approach to bioengineer human vascular networks in vivo. In our model, human blood-derived ECFCs are combined with human Mesenchymal Stem Cells (MSCs) in a biocompatible hydrogel and injected subcutaneously into immunodeficient mice where they form an organized vascular network that joins with the mouse vasculature. This model is ideally suited for studies on the cellular and molecular mechanisms of human vascular network formation and for developing strategies to vascularize tissues.

The ability to bioengineer vasculature creates the possibility to introduce additional instructions into tissues by genetically modifying the endothelial cells that will actually build these blood vessels. We are developing models that use genetically-engineered ECFCs to achieve controlled administration of therapeutic proteins in vivo.